You are here: Home / If It Bleeds, It's Blogged / What Seemed to Push Aaron’s Arab DDOS Hackers Over the Edge?

The orginal post is lost, as I failed to back up my blog the night before the DDOS, but it seems that my success in:

And when you clicked on that, you saw this koran:

For those who clicked to see a larger version, here are references to the text in white:
mother-kicking, sister-murdering, camel-fellating, donkey-buggering 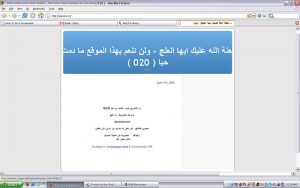 The curses of god upon you, you Coward*. You will never enjoy this website as long as I am alive. (020)**

This site has been hacked to the third time by 020, and I am waiting on your next move you coward.

This coward will have a dilemma. Where would he find an arabic to english*** translator?

And I am telling you all, wait until I make his server crash God willing.

* 3elg is an a distictively Saudi word for coward, and it referrs to the times of the abbasiyads caliphates, when they supposidly went into battle against roman invaders who were cowardly in battle, and they were called the 3olougg. The singular of that is 3elg.

Given the photo, above, my Muslim readers can stop begging me to read a Koran. I have. I own 3 copies, one for reference, one in paperback and one for revenge. I’ve also read most of the works of Ibn Warraq and Bernard Lewis and Victor Davis Hanson. Islam is many centuries overdue for someone to nail a Islamic version of Luther’s letters onto the Kaaba. Until there is a civil war within Islam, we have to assume and prepare that the ascendant baddies may very well rule the day.

In the meantime, since Friday, has anyone found a single pro-Muslim site condemning Friday’s DDOS attack on Hosting Matters? Just askin’. Or do the VAST MAJORITY of mainstream Muslims think it’s cool? If you aren’t reading condemnations by CAIR or any Muslim organization and the big dog blogs aren’t hounding them to be on the record about it, we’re being dhimmified.

Or do foreigners have the right to impose their Dark Ages standards on our First Amendment and commit destructive vandalism here in the US toward that end?

I vehemently disagree with the apologists for the Religion of Peace of the Dhimmicratic left (academia & mainstream media) and the ROPublican right (big business-uber-alles types and our State Department and some pundits who say we should work with the “moderate” Saudi royal family) who believe we can convince 1.2 billion people who see themselves and their culture on the ascendant that they can be convinced to adopt our standards of political and civil liberties. I believe that if the number of the opponents of the radicals do not exceed the radicals, one should properly judge that entire civilization as abetting the radicals.

I am reminded of Uma Thurman’s scene from Kill Bill where she dispatches dozens of sword-wielding attackers… in serial fashion. The attackers are dumb. If they had rushed her, Uma would have had time and momentum to kill at most 3 of them with one stroke of her samurai sword before they would have turned her into minced meat. That willingness to sacrifice is intelligent and evidence you actually want to achieve victory. Not rushing totalitarians while they’re still nascent means more people die piecemeal. There is NO utilitarian calculus that supports “wait and see” policies. Someone ELSE will dispatch the attacker, right? RIGHT? Sorry, but we have a moral right to demand that the 1.2B Muslims rush their baddies on mass and to consider their failure to do so as evidence proving the joke that “moderate Muslims” are merely those that haven’t declared jihad on us… yet. People tell me to read the Koran… here, it’s YOUR turn:

You see, my grudge with Islam is that among the so-called 1.2 billion moderates, they can’t muster an anti-jihadist army of 1% of 1% (that’s 120,000 vehement anti-jihadists for you innumerates) who are willing to save the reputation of the Religion of Peace by committing suicide missions against the terror-teaching madrassas. No, not even in the United States can we find mullahs and imams who are willing to go against the CAIR/Wahabbist party line. You might find an occasional Muslim who is a good person, but their faith has quantifiably little to do with their character. If there are not 1% or even 1% of 1% of the Muslim world begging to be heard by our mainstream media to be armed to battle the Wahhabists, we need to pay attention. If you doubt me, link to stories about Muslims who have become more charitable or tolerant toward NON-MUSLIMS as a result of either conversion to Islam or a renewed faith. Will the few anecdotes be sufficient to outweigh the 1.2B who demonstrate in the streets?

Houston, we have a problem with a civilization that has not openly abandoned doctrines of hudna, jizya, dhimmi, dar al harb, jihad, etc. If you don’t know what those terms are, you’re simply unqualified to have an opinion on the Religion of Peace, as unqualified and as morally responsible as the vast majority of clueless Americans were about the dangers of Nazism in the 1930’s and who allowed the USS St. Louis to be sent back.. If you spend more time watching Dangerous Housewives or spectator sports each week than reviewing the following websites to monitor the ascendancy of a civilization that considers us The Great Satan, you are morally reprehensible:

It took Hirohito’s unconditional surrender to change Japanese minds. Libya’s recent WMD capitulation seems to have triggered hope if Victor Davis Hanson’s recent appendectomy is any indication. I have long stated that diplomacy is the enemy of longterm peace. It simply buys a short term illusion of peace while our foes arm themselves to cause a bloodier conflict later. There are two words that always precede longterm peace: “unconditional surrender”. And you pray to our Creator that those words are said to a benign victor like the US has been.

If, in the United States we are so cowed that we can’t even react to Muslims threatening mushroom clouds on Israel and the United States and DEMAND condemnation by the leaders of our community’s mosques — the places of worship where your Muslim friends (who aren’t really like the others) go — we’re more dhimmified that we know. Hamster Dance, eternal internet meme, gets Mohammedized to the tune of Losing My Religion.

Los Angeles’ La Brea Boulevard was defaced for nearly a decade by a huge chrome Lenin head with Mao on top. My take on the Who’s Next album cover.

Tammy Bruce used to feature this animation of mine.

@HeyTammyBruce @realDonaldTrump @USMC I wonder how much of Obama's pallets of cash sent on the eve of DJT's inauguration were used by these protestors and Hezbollah.
h J R

@JulietteAkinyi Happy to subsidize a month of any woman's birth control (non-Constitutional benefit) if she reciprocates with paying for a month of practice ammo so I can practice my 2A rights. That's fair.
h J R

@HumorInstitute I don't see DJT as a moral role model for my kids, but he's been excellent as a POTUS, getting a solid B+, failing mostly on the border. For those who object to his coarseness, 95% of that happened when he was still a registered Dem.
h J R